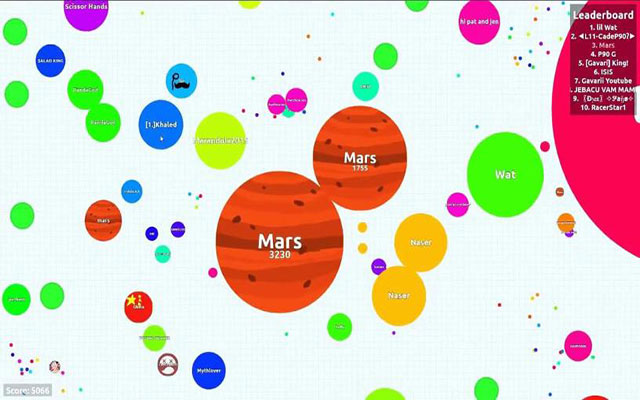 Agar io game is a legendary game. Get ready to have a great time in agar.io game which is full of excitement every moment.

https://www.extfans.com/installation/
Agar io is the most entertaining and most sought-after game of recent times. This game is legendary. You will play together with other players participating online in the game. Your goal is to swallow and grow other players, but to grow steadily. You can swallow smaller opponents than you in Agar io game, you have to escape when the larger opponent arrives. This game can last forever. If you are big enough your opponents cannot swallow you. Being big enough in Agar io game can take hours. Good luck in this fun game. So, it all starts with useful microparticles-granules, and then develops into eating bacteria from other players. Start with balls smaller than yours, because they are simply easier to destroy. However, smaller bacteria are more maneuverable than large and heavy ones, which are harder to escape from you, but also more difficult to destroy by close encounters. If the bacteria do not want to come close to you in any way, shoot at those smaller ones with small particles, this will attract the attention of potential rivals, and you will be able to destroy them when they approach you. There are subtleties known exclusively to experienced gamers: if you are attacked at times by a larger bacterium, you can safely hide behind green bacteria with small spikes. If the situation is already too critical, press the letter W five times and then you will be able to shoot the enemy. Or there is another trick: if the enemy is too close, and it is very large, press the space bar to divide the bacterium into 2 parts. And while the giant will destroy one cell, the second will be able to slip away.
去下载 - Agar io Online Game