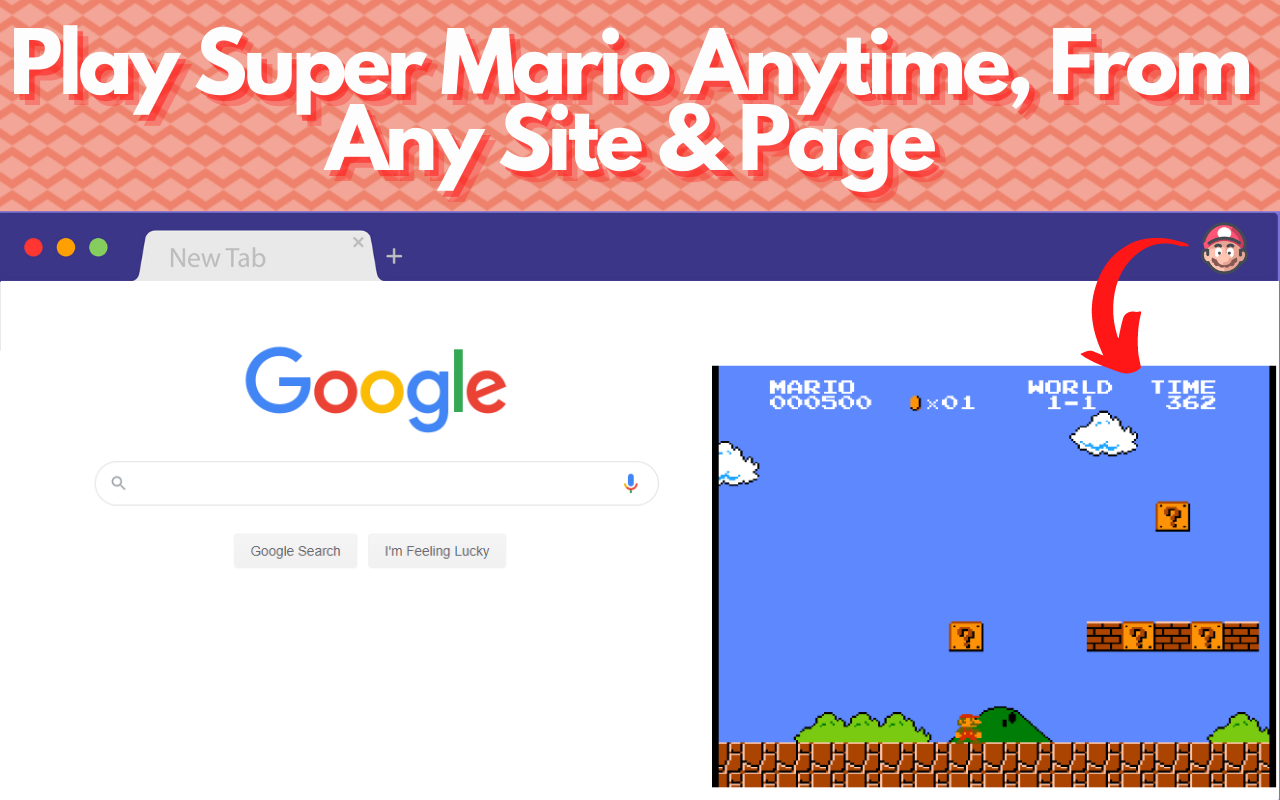 https://www.extfans.com/installation/
This is the classical super mario game, as we all know and familiar with. To install this extension, just click on "add to chrome" button. To initiate the extension and start playing super mario, after installing it just click on the icon (upper right menu) and the game will get opened. Some history about this wonderful game - Super Mario is a Japanese platform video game series and media franchise created by Nintendo and featuring their mascot, Mario. Alternatively called the Super Mario Bros. series or simply the Mario series, it is the central series of the greater Mario franchise. Super mario game rules - The "Super Mario Brothers" games star a portly plumber named Mario who has to rescue the danger-prone Princess Peach from the clutches of the evil Bowser. Along the way, Mario and his brother Luigi collect power-ups, dispatch minor enemies and jump across a variety of moving and tiny platforms in order to reach the end of the course. There are a few basic rules that will get you through the game. Attacking Enemies The general way to attack enemies is to jump on them. If you collide horizontally, you can be damaged. The first enemy you will encounter is the goomba, which are small, mushroom-shaped simpletons that waddle towards you. Koopa Troopers, the tortoises, will retract into their shell when jumped on, and can then be picked up and thrown at other enemies. Other Enemies Enemies such as Spiny, the spiky version of a Koopa Trooper, and the Pakkun Flower, a man eating plant that grows from tubes, cannot be jumped on. To kill these, you have to throw something at them. Power Ups: Mushroom The power ups are found in the “?” boxes, and are the best way to stay alive through tough levels. Mario starts out small, and one hit will mean you lose a life and have to start the level again (unless you passed the checkpoint). If you get a normal red and white mushroom you will grow in size. If you get hit while Mario is this size, you will revert to his original size but you will stay alive. Power Ups: Flowers You can also get many other power ups across the Mario Bros series, such as the fire and ice flowers, which give you the power to throw fire and ice respectively. These change the color of your suit to red for fire and blue for ice. Other Power Ups The wing hat allows you to fly if you get a sufficient run up, and the propeller hat (available on "Super Mario Bros Wii") shoots you up into the air and lets you drift down slowly. Stars give you invincibility for a short period of time. Movement Mario has a few basic movements. You can walk, run, duck, jump, “Ground Pound,” slide, “Double Jump” and “Wall Jump.” These movements have their own specific uses. For instance, when running, you can pass over single block spaces without falling in. If you’re big but need to get through a single block gap, run up to it and then duck down.
去下载 - Super Mario