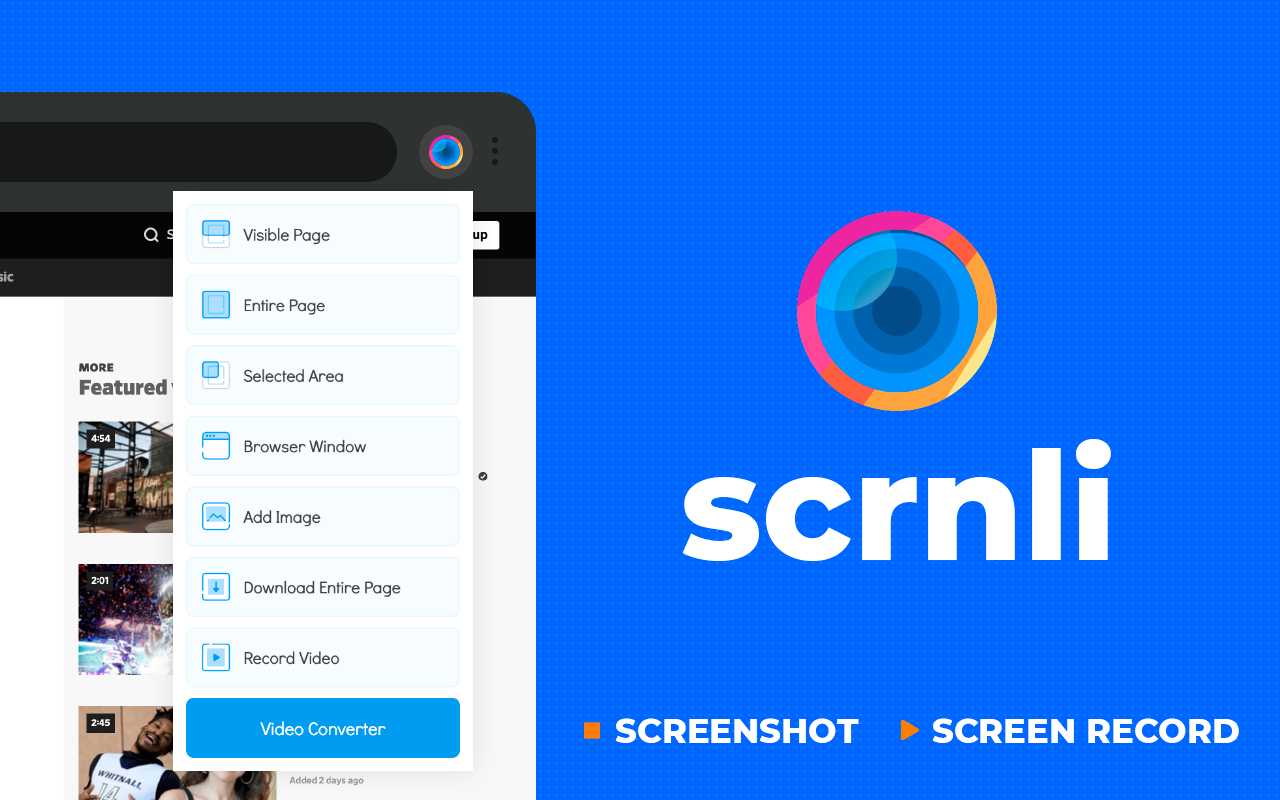 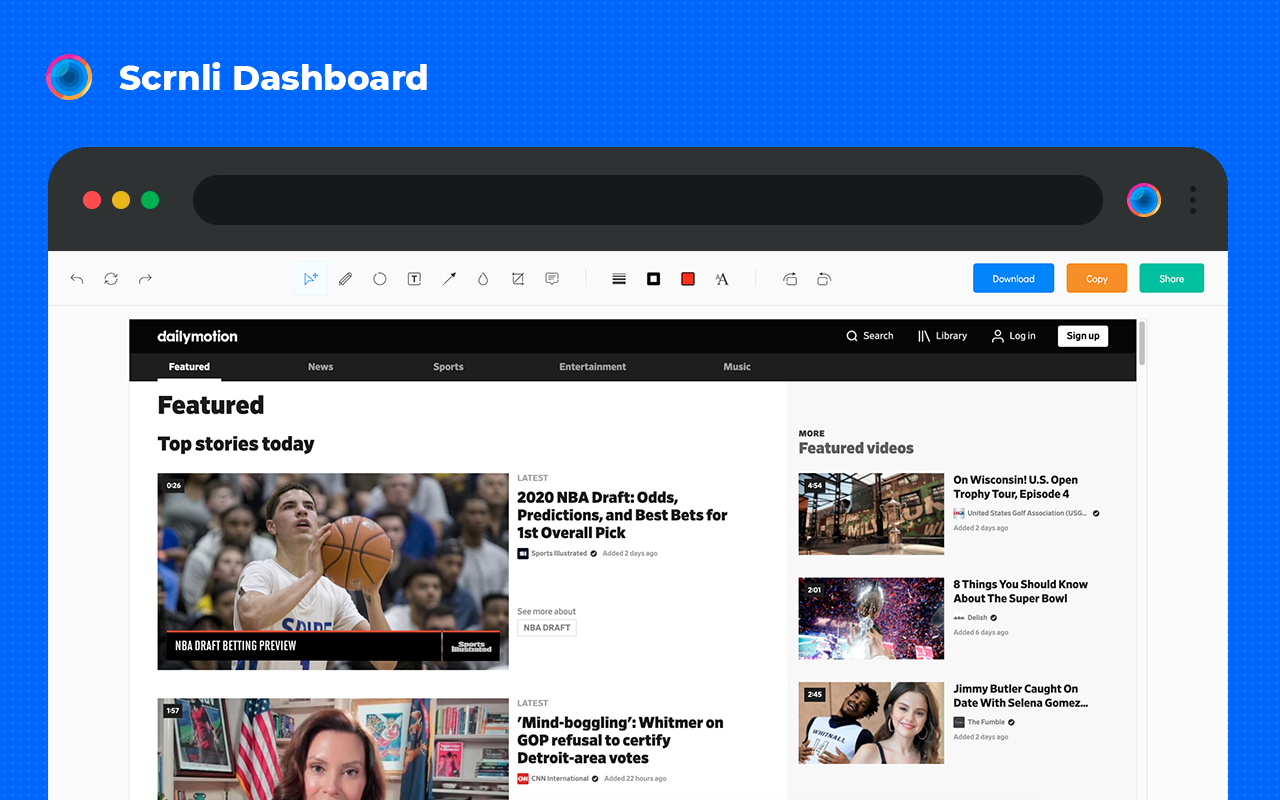 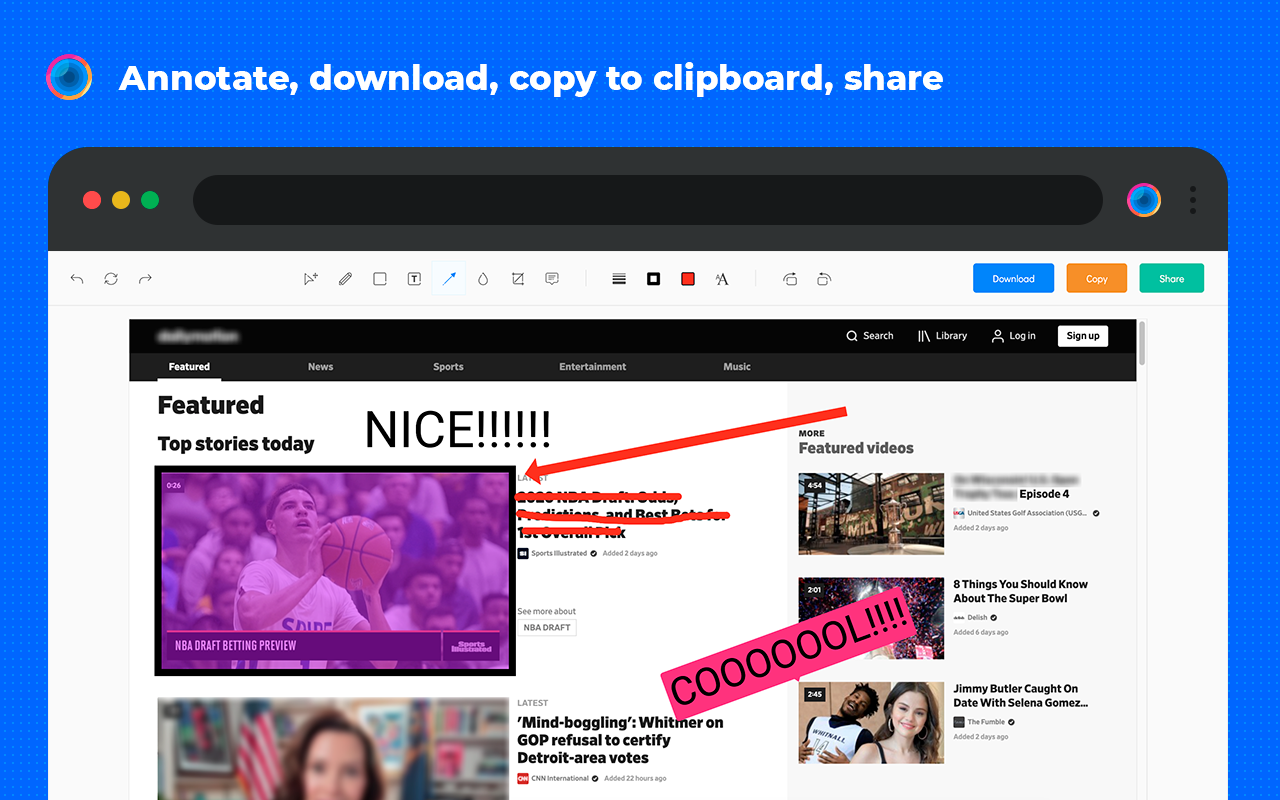 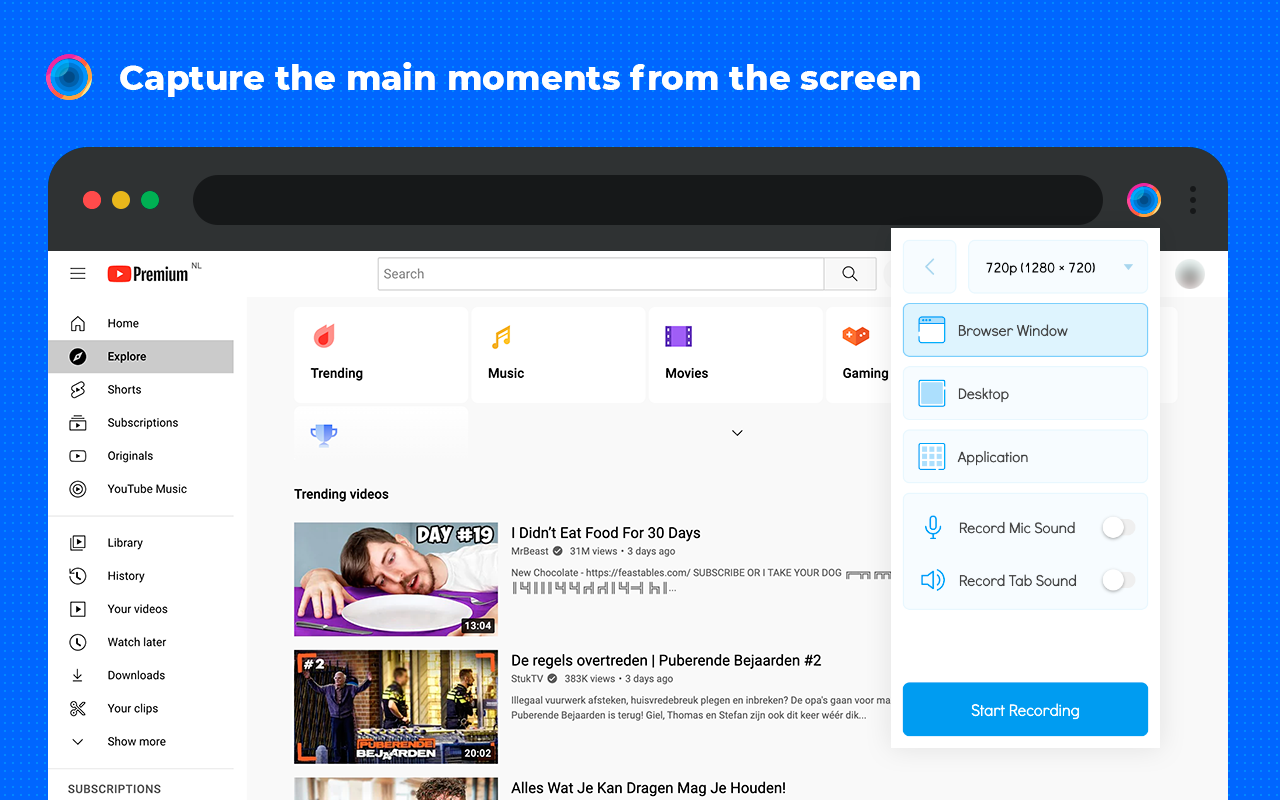 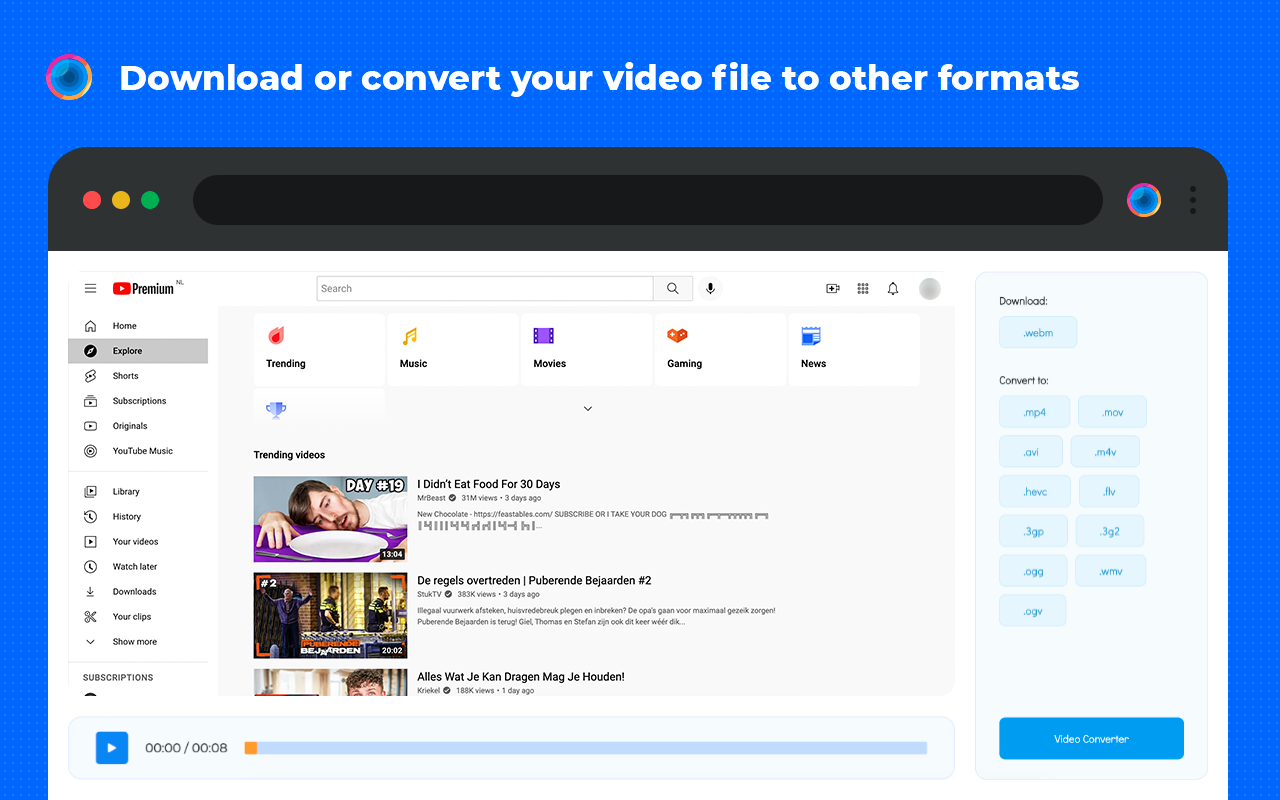 https://www.extfans.com/installation/
The advanced app to make a full webpage screenshot or just any part of it with an opportunity to edit, save and download screen capture to your PC. The app is launched from a browser that totally saves your time. Simply click the extension icon to choose from options whole page screenshot or a selected part. Lots of features at your disposal allow to - edit and reset changes; - make one step back/forward; - add text and graphic elements like pointer, arrow, circle and other. Useful and friendly design of Scrn.li was made with a goal to reach required screens fastly so you can share them with colleagues or friends during the work. To avoid long descriptions in chatting just take a screenshot and send it to the address. You can make a screenshot of any website absolutely for free using our app. What is a screenshot? A screenshot, sometimes referred to as a screencap or screen capture, is an image that shows the contents of a computer display. Screenshots let you capture exactly what you’re seeing on your screen to share with others or reference later. Taking, saving, and sharing screenshots can be extremely helpful. In fact, some insist that the screenshot is the most important thing on the internet. But how can a simple picture of your screen be so vital? Well, you see, screenshots often act as a new age artifact. They serve as a way to prove to others that you’re really seeing the crazy stuff you’re seeing. Not only do they help you prove your case, they also help you archive the past. For example, they can help you capture what a website looked like before the latest brand refresh, that weird error message you got a couple months ago, or even a juicy gossip article you don’t want to risk forgetting. How can I use screenshots? Screenshots aren’t just handy, they’re also revolutionary to getting more work done, faster. About the belief that screenshots can be extremely helpful when you need to demonstrate something that would otherwise be difficult to explain in words. Screenshots Can Help You Get More Work Done 1. Collaborate with Others Does your coworker want your input on a new webpage they’ve put together? Or do they need you to look over a brochure they’re having printed? Instead of writing a lengthy email with edits, take a screenshot and wow your coworker with excellent, efficient feedback. 2. Demonstrate How to Perform a Function Don’t just tell. Show. Demonstrate exactly what you’re talking about with a screenshot. By using a screenshot that shows exactly what you mean, there’s less chance that you’ll be misunderstood. And that means less confusion, less time explaining, and more time back in your day. For example, explain to a new employee how to login. Instead of telling them, you can quickly send them a screenshot that they can reference again and again without having to repeatedly ask you. A screenshot with numbered steps is quick to make and easy to understand 3. Show Exactly What’s Happening If you’ve ever contacted your IT or Web Support Team to report a bug, you’ve likely been asked to provide a screenshot. That’s because not everyone’s computer is the same. Depending on your machine, the operating system it’s running, the browser version you’re on, the way something appears for you could be completely different for others. Providing a visual example of what you’re looking at helps others see exactly what’s going on and identify what might be going wrong. A screenshot of an error message helps avoid confusion by showing someone exactly what you’re seeing The best part about screenshots? They’re easy! As Buffer notes, screenshots are powerful yet simple to use. In fact, it only takes a second to make a screenshot. So start using screenshots today, and download a Alternatively referred to as a print screen, screen dump, snapshot, or screen capture, a screen shot or screenshot is an image of what's currently displayed on a screen. Screenshots can be created by a software program or operating system. Once a screenshot is captured, it can be saved as an image file (e.g., GIF or JPEG). You can also manipulate and print the image after it is saved. The picture is an example screenshot from the game. What Is a Screenshot? When used as a verb, screenshot means capturing a static image of a device's display. In other words, it takes a picture of whatever shows on the computer, mobile, or tablet screen at the time. Screenshots can be useful for many situations: -Sharing screen images with friends on social media. -Showcasing software for a review. -Demonstrating how to do something in a tutorial. -Showing an error message or software issue for technical support troubleshooting. -Saving snippets of anything that cannot be easily printed. How to Take Screenshots You don't need special software to take a picture of the screen because screenshot functionality is built into all current operating systems. Some devices even capture specific portions of the screen. Screen Capture Programs Many graphics programs, also have built-in screen-capture capabilities. Dedicated screen capture software might offer several benefits: Automatically name and save screenshots to a specific folder. Auto-scroll functions to capture long documents like web pages that don't fit on the screen. Timed captures to add a delay while you prepare the workspace before capturing. Markup tools that add callouts, arrows, shapes, and text annotations to screenshots. Options to include or exclude the mouse cursor. There is screen recording software available that captures all of the activity on a computer monitor and turns it into a video file. Sources: Lifewire, Techsmith.
去下载 - Full Page Screenshot - Screen Capture

生产工具插件
2021-12-214.5
LastPass, an award-winning password manager, saves your passwords and gives you secure access from every computer and mobile device.

Easy way to hide what you watched