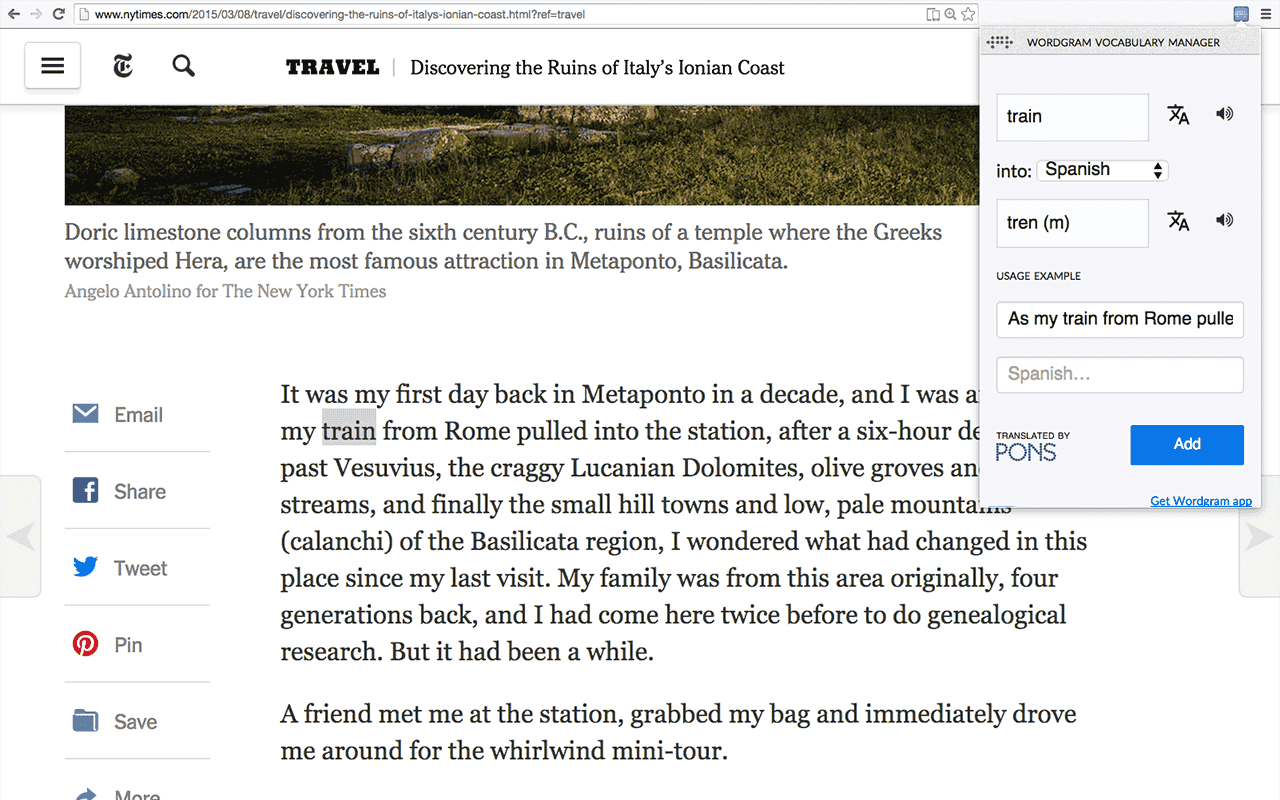 https://www.extfans.com/installation/
Wordgram browser extension allows you to learn languages, while surfing the web. On a web page, double-click the word you don't know, then click on the Wordgram icon. If you want, you can use automatic translations, or enter your own phrases. To actually benefit from using this extension, download the accompanying mobile app (currently for Android: https://play.google.com/store/apps/details?id=pl.makenika.wordgram). All your words will be synchronized, and you will be able to learn anywhere. Wordgram is designed to help you expand and manage your vocabulary. It's mechanism is based on the best practices and scientifically proven methods for learning foreign languages. Contrary to many other apps for learning, which give you an illusion of language competency, Wordgram uses the principle of full recall. Wordgram makes it a bit more easier for you, because it doesn't require huge amounts of motivation. Why? With Wordgram you learn many times a day, and each learning session can take as little as 15-30 seconds, which greatly reduces the power of your delaying tactics ;). How does it work? You just add words or phrases that you want to learn, and Wordgram will present you the words using specially crafted flash cards. You can use Wordgram during your normal language classes, or quite independently. For example, while reading an article on the Internet, you can use Wordgram’s built-in translator to get the meaning of an unknown word, and add it to your list of words. Now, you can also discover new words by watching movies! Just use our search engine to find a movie you're about to see, and Wordgram will automatically suggest interesting words to learn. To make your learning process efficient, Wordgram uses sophisticated spaced repetition algorithm, which is inspired by very popular methods developed by Paul Pimsleur and Sebastian Leitner. The mechanism that is used in Wordgram is based on the idea of a forgetting curve. Once you learn a new word, you have to repeat it in increasing intervals, so that you don’t forget it. At the same time, you don’t waste time repeating those words that you know well. Wordgram is designed to help you achieve high learning efficiency. It informs you, which words need a repetition, by showing you automatic notifications. Some of you will probably know people, who have been learning a foreign language for several years, but since they were not using it, they forgot it almost completely. It’s like with unused muscles which disappear. With Wordgram however, you can continuously learn a language during the course of several years and steadily expand your vocabulary. Wordgram’s spaced repetition algorithm is smart enough to schedule a repetition of a word you know, just once every few months, so that you keep you knowledge fresh and ready to use. Wordgram also provides packages with phrases for the most popular languages (e.g. Spanish, French or German). We will continue adding more phrase packs for more languages (Italian, Portuguese should follow soon). But in principle, you can learn any language. Just add your own words and start learning. Built-in translator will help you with the process. In a nutshell: - Create and edit your own translations, as many as you like. Learn them later. - „Repetition is the mother of study.” Repeat the words from your vocabulary set, as many times as needed. - Wordgram builds on Pimsleur and Leitner methods for language learning. - Wordgram won't forget words that you've learned so far, so you'll be able to continuously improve and build on that. - Wordgram is able to speak in many languages, to help you with pronunciation (paid, free trial available). - Wordgram can also listen to you, making the learning process more natural (paid, free trial available). - Wordgram can set automatic reminders, so that you can learn a little each day. - Use it anytime. Even if you only have a minute, it's a perfect time to use Wordgram. - Wordgram can track your progress and provide reports with your performance.
去下载 - Wordgram - vocabulary manager

生产工具插件
2021-12-214.5
LastPass, an award-winning password manager, saves your passwords and gives you secure access from every computer and mobile device.

Speed up, slow down, advance and rewind HTML5 audio/video with shortcuts

Easy way to hide what you watched