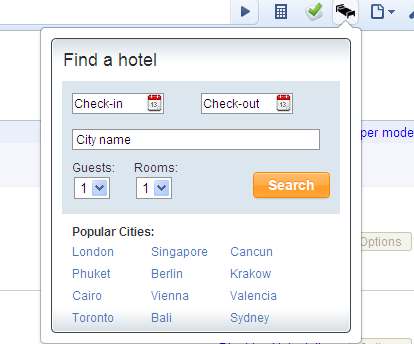 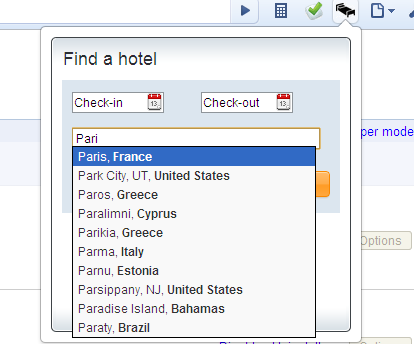 https://www.extfans.com/installation/
Find a hotel using HotelsCombined.com. HostelsCombined is a meta search engine that find the best deal in all the most known travel sites. You will always find the cheapest price! This extension offers autocomplete for city name and widget for choosing dates. And the result page can be translated to your language. Hope you enjoy it! Visit http://www.hotelscombined.com/?a_aid=17728 Hotels?? A hotel is an establishment that provides lodging paid on a short-term basis. The provision of basic accommodation, in times past, consisting only of a room with a bed, a cupboard, a small table and a washstand has largely been replaced by rooms with modern facilities[citation needed], including en-suite bathrooms and air conditioning or climate control. Additional common features found in hotel rooms are a telephone, an alarm clock, a television, a safe, a mini-bar with snack foods and drinks, and facilities for making tea and coffee. Luxury features include bathrobes and slippers, a pillow menu, twin-sink vanities, and jacuzzi bathtubs. Larger hotels may provide additional guest facilities such as a swimming pool, fitness center, business center, childcare, conference facilities and social function services. Hotel rooms are usually numbered (or named in some smaller hotels and B&Bs) to allow guests to identify their room. Some hotels offer meals as part of a room and board arrangement. In the United Kingdom, a hotel is required by law to serve food and drinks to all guests within certain stated hours. In Japan, capsule hotels provide a minimized amount of room space and shared facilities. Hotels Combined??? HotelsCombined is a hotel metasearch engine founded in 2005, with headquarters in Sydney, Australia. The site operates in 39 languages, handles 120 different currencies and aggregates more than 2 million deals from hundreds of travel sites and hotel chains. The company employs over 200 staff. History In 2005, Yury Shar, Brendon McQueen and Michael Doubinski partnered to create an all-encompassing hotel site where users could access the best rates from a variety of top travel sites all in the same place. All three founders previously worked for HotelClub, now part of Orbitz worldwide. Initially working out of their homes and without having raised any financial capital, the HotelsCombined founders launched the site following nine months of development. The website steadily earned an organic consumer base[clarification needed]; within a year, the co-founders were able to hire their first employee. Today, HotelsCombined has nearly 200 employees and 17 million users monthly. The site is available in more than 220 countries and in 39 different languages. Technology HotelsCombined is a hotel metasearch engine. Through partnerships with numerous online travel agencies and hotel chains, HotelsCombined allows users to search and compare hotel rates in one search. It also provides an aggregated summary of hotel reviews and ratings from external sites. Affiliate Program HotelsCombined's Hotel Affiliate Program allows businesses to earn revenue by offering the hotel price comparison service on their website. Hotel content is available in 29 languages and the interface can be fully customised to allow businesses to retain their brand. In April 2012, the company began a partnership with low-cost airline Ryanair to power their hotel price comparison service, RyanairHotels.com. HotelsCombined also powers the hotel search for a European flight comparison site, as well as eHotel360, Travelsupermarket (part of Moneysupermarket), and many others across Europe, Middle East and the rest of the world. Awards In 2010, HotelsCombined won TRAVELtech "Website of the Year" and was named a finalist in the Telstra 2010 Business Awards.In the same year, it was awarded ninth place in the Deloitte Technology Fast 500 Asia Pacific Ranking, was named “Website of the Week” by the Daily Mail, and was declared one of the top 10 travel websites by guidebook author Arthur Frommer (of Frommers.com). In 2011, HotelsCombined was once more named one of the top 10 ranking Australian businesses in Deloitte’s Technology Fast 50 Program.[11] Also in 2011, the UK’s The Independent named HotelsCombined one of the best money-saving websites while Pauline Frommer named it a “terrific resource”. On 30th November 2013, at the World Travel Awards in the La Cigale Hotel in Doha, Qatar, HotelsCombined won the "Worlds Leading Hotel Comparison Website 2013" Media The company's Hotel Price Trend reports, which show hotel price trends aggregated across major travel sites and hotel chains, have been covered in publications around the world including the L.A. Times,[14] The Gulf Daily Newsand The Australian.
去下载 - Hotel Search

购物插件
2020-01-024.9
Get coupon codes, loyalty rewards, and better offers from other sellers. By installing, you agree to the terms at wikibuy.com.

Rakuten Ebates: Get Cash Back For Shopping-购物返现插件

购物插件
2018-08-214.5
Check for better prices on Amazon while browsing ebay & other online stores

Adds price history charts and the option to be alerted on price drops to all Amazon sites.

Checks if you own a game on Steam on various websites